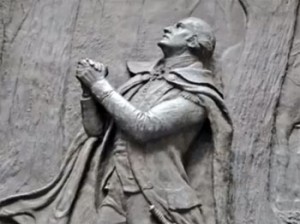 Love him or hate him, President Woodrow Wilson rightly stated,

A nation that does not remember what it was yesterday, does not know what it is today, nor what it is trying to do. We are trying to do a futile thing if we do not know where we have come from, or what we have been about… America was born a Christian nation. America was born to exemplify that devotion to the tenets of righteousness which are derived from the revelations of Holy Scripture.

Recently, while doing a radio interview I was asked what my opinion was concerning immoral issues that are taking place in our country. I said, “My ‘opinion’ doesn’t matter any more than your ‘opinion’ does.” I said, “It is OK for us to have different opinions as long as we are rooted in the same principles.”

What Happened to American Principles?

When we are no longer rooted in the same principles, corruption seeps in and begins to divide and conquer through outlets such as the media, public schools and colleges.

For example, most young people think America is a democracy. Yet, when saying the Pledge of Allegiance, you recite,

I pledge allegiance to the flag of the UNITED States of America, and to the REPUBLIC for which it stands, ONE NATION UNDER GOD, indivisible (cannot be divided, separated or broken), with liberty and justice for all.

President Andrew Jackson said, “The Bible is the rock upon which our republic rests.” And these are the principles that keep us united.

I can just now hear the media, the teacher, the “well-educated” college professor or the philosopher (using big words with common-sense meanings) decry, “We are not a Christian nation.” They then complain about the government that will not be ruled by Law (God gave government through Moses – Exodus 18:21).

In their confusion they blurt out the truth: They would rather listen to man’s 10,000 commandments than to God’s Ten Commandments, which only produce liberty when you love God with your whole heart, mind, soul, and strength.

In essence, the unprincipled in America are at war with God and His Law, which commanded we should not kill, commit adultery, steal, lie or covet. They seem to forget that “Wherever law ends, tyranny begins”… and tyranny is what you are dealing with today, because most people do not know their history.

America, how is it that the left (as it is called) knows how to lie better than the right knows how to tell the truth?

The remedy: know your history

The University of Houston political science professors searched to find where the Founding Fathers chose their ideas:

Here is the correlation between the Constitution and the Bible concerning America’s Christian heritage:

Watch the undisputable symbolism of America’s Christian Heritage below:

Watch the prayer that literally rocked the Capital as Bradlee lays out our foundation to the Minnesota State Legislature: