The Church Militant – Where Is It? Part 2

“A barracks is meant to be a place where real soldiers were fed and equipped for war, not a place to settle down in or a comfortable snuggery in which to enjoy ourselves. I hope that if ever, they, our soldiers, do settle down God will burn their barracks over their heads!” 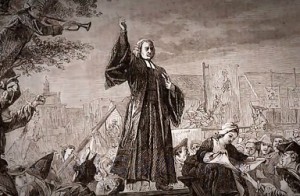 Where is the American church militant? Who is standing up for Christian values?

Today across the country, recruiters for the military are doing their best to recruit young people for the service by only giving them one side of the story, namely, the financial and educational benefits, and leaving off their duty. But what the young people who sign up for the military fail to realize is that when joining the military, sooner or later they are going to be brought into the battle (2 Timothy 3:12). After all, the purpose of the military is to maintain law and justice and establish peace and liberty, yet not without the fight (1 Timothy 6:12). And, sorry to say, because they were not told the truth about the purpose of the military, many end up AWOL or KIA.

In parallel, what of the American professed church today? They fall under the delusion that God Himself will do on His own what He has commanded them to do as well (Deuteronomy 28:1-2). And because of this mentality and a lack of spiritual understanding, the American professed church is now fallen to the curse rather than the blessing. They have forgotten that they were responsible to keep the commandments of God. They want God’s hand without holding His heart. These professors want the crown, but not the cross. They seem to forget that the church is to be a partaker with the afflictions, that we might also be partakers with the glory which is in Christ Jesus (1 Peter 4:13). Or what of scriptural exhortation found in Acts 14:22?: “Confirming the souls of the disciples, and exhorting them to continue in the faith, and that we must through much tribulation enter into the kingdom of God.”

We also see the American church spend much of its time emphasizing the sacrifice of Christ rather than realizing that Christ also died magnifying the Laws of God toward sin. The cross of Christ demonstrated God’s hatred for sin and His love for mankind (John 15:13). And if these professors were to put things into scriptural perspective concerning the Calvary transaction, one would think that out of gratitude for the sacrifice on their behalf, they would do the same things for others that Christ died to give unto them. After Christ’s crucifixion and resurrection, He tells His disciples, as the Father has sent me so I send you (John 20:21). Does this exempt the modern professors from His example? Absolutely not! Remember, friends, he who has been forgiven much loves much (Luke 7:47).

I ask these modern professors, where is the love toward God and toward mankind (1 John 5:21)? Again, the American professing church seem to want the benefits without the work of faith and the labor of love (1 Thessalonians 1:3). We have been redeemed through the blood of Christ for a people zealous of good works (Titus 2:14). These are they that profess they know God; but in works they deny Him, being abominable, and disobedient, and unto every good work reprobate (Titus 1:16).

When Church and the world can jog along comfortably together, you may be sure there is something wrong.” She continued, “If Christians were equally faithful and devoted to the Lord and separated from the world, living so that their lives were a reproof to all ungodliness, the world would hate them as much as it ever did.

We need the whole armor of God to fight against the powers of this world and to stand against the wiles of the devil. The armor contains truth, righteousness, faith and prayer. God is all-powerful, and we are safe under His wings. Who shall separate us from the love of Christ?

But it first starts with prayer:

The voice of the prophets: