Back to Elementary School with College Professors

“The ‘change’ that America was sold by this administration was deceptive in that people believed the president was paralleling change with reclamation and restoration to our founding documents. Not a departure!” – Bradlee Dean speaking to college professors in North Carolina

(Read same article at You Can Run International) 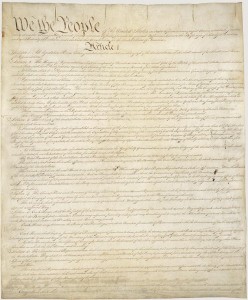 The Constitution of the United States. How many Americans have actually read it?

This past week, I have been on tour rocking the Carolinas, and as I look in hindsight, I am within myself trying to figure out who was “rocked”… North Carolina, or me? If I have not been busy doing live radio six days a week, then I have been speaking at tea parties, eight (secular) college classes, one Christian college, a high school and several churches, and to finish up the week I will headline a major citywide event in Rockingham, N.C.

Through all of this past week, the one thing that took me by surprise was the college professor class.

When I first started the class, I asked the professors if they have taken the time to read their founding documents. For example, the Declaration of Independence, where it is written that we “are endowed by (our) Creator with certain unalienable Rights.”

Documents which, by the way, are posted on their school walls.

Thomas Jefferson stated, “If a nation expects to be ignorant and free, in a state of civilization, it expects what never was and never will be.”

I then said to them, “If you do not know your rights, you do not have any rights!” They all agreed.

I asked these professors, “Do you love your freedoms?” They, of course, answered in the affirmative. I replied with, “Freedom was not given to do what we want to do, but what we ought to do!” Again, they all agreed.

I then proceeded to ask how many in the room had “grandfathers and grandmothers, fathers or mothers, uncles or aunts, or perhaps, brothers or sisters or even cousins who served in our military.”

Every one of these teachers raised their hands.

I responded, “Wait a minute, these family members served in the United States military, many fighting, bleeding, and in some cases dying to magnify the laws of our constitutional republic, and you do not even know what they are fighting, bleeding and dying for?!”

They all looked ashamed.

Though they are very kind people, I had to tell them that they are, in fact, allowing themselves to be destroyed because of their lack of knowledge (Hosea 4:6).

I proceeded further with asking these college professors if they knew the oath that our brothers and sisters would recite before serving We the People. They did not.

The next thing that I asked theses college professors was, “What form of government have we been given: a democracy or a republic?” Every single one of these college teachers replied with, “We are a democracy!” Friends, I was shocked!

I had to share with them what Fisher Aimes, the architect of the First Amendment, said of a democracy that:

“A democracy is a volcano which conceals the fiery materials of its own destruction. These will produce an eruption and carry desolation in their way.”

I asked them to recite the Pledge of Allegiance, slowly:

“I pledge allegiance to the flag of the United States of America and to the republic for which it stands, one nation, under God, indivisible, with liberty and justice for all.”

I asked, “We are a what?”  They all in unison replied back, “We are a republic!”

I told these professors that because I was so thankful for the sacrifice given for our freedoms, I actually read our Constitution and found within its pages Article 4, Section 4, which states:

I bet you did not know. College mottos: